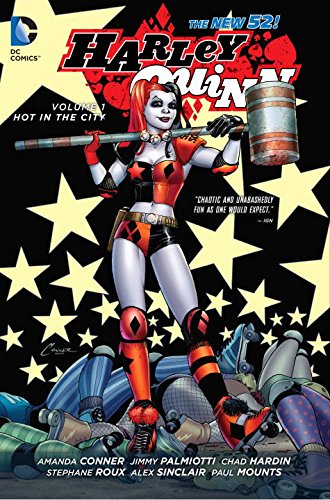 Hot in the City is the first New 52 volume of Harley Quinn, collecting issues #00-#8 which came out in 2014-2015. Picking up after the events of Suicide Squad: Running with the Devil, it was written by Amanda Conner and Jimmy Palmiotti with art (mostly) by Chad Hardin. I say “mostly” because the first issue is a fourth-wall breaking dream sequence in which Harley and the writers cycle through like seventeen big-name artists as they try to decide who should draw this run. 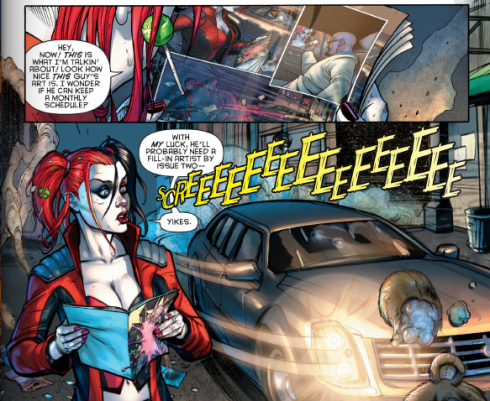 As with Wonder Woman, my experience of Harley until recently was limited to her big-screen outing in Suicide Squad, but I knew the broader details of her backstory: a psychologist and trained gymnast whose real name is Dr Harleen Quinzel, she was originally introduced 25 years ago in Batman: The Animated Series. She has (had) a toxic relationship with the Joker and she’s also romantically linked in a much healthier way with fellow Batman villain Poison Ivy. She’s no hero, but she’s often drawn sympathetically.

What originally drew me to the character in Bombshells and her Sensation Comics appearances was her sense of fun, but as I read this volume I noticed something that echoed what I liked about Wonder Woman: Harley is totally free of the weight of societal expectations. Her “crazy” gives her license to operate outside all of that, and she likes it that way. Alongside Wonder Woman, her puns and loose-cannon style provided a great counterpoint, but it also translates well to her own comic. She’s an instantly lovable combination of playful, violent, loyal, vulnerable and dangerous.

I’ve seen Harley get a bad rap amid her massive popularity with young women – because people think she represents a romanticising of abuse and mental illness, her outfit is too skanky, girls aren’t allowed to just like stuff, whatever. This collection is fairly significant in that Harley has just dumped the Joker for what I’m pretty sure is the first time ever. (Long story short: he tried to kill her because she thought he was dead and hooked up with Deadshot. She tried to kill him back before deciding he was no longer the Joker she fell in love with.)

Oddly enough, the Joker hasn’t really featured in any of Harley’s comics appearances I’ve encountered so far (admittedly, not that many). He rates a mention, but he’s mostly AWOL. In his place is Poison Ivy in spades. Although the writers have confirmed that she and Harley are in a non-monogamous romantic relationship, this storyline never defines it in so many words – maybe for plausible “gal pal” deniability. Either way, losing the victim angle makes Harley more palatable to a mid-2010s audience and allows her to be re-invented to some extent as an anti-hero with her own agenda. I really enjoy the fact that Harley has been allowed to grow beyond her original raison d’etre, especially as a female character created as a villain’s sidekick.

Her adventures in Hot in the City are fairly light and self-contained. Single and at a loose end, she’s suddenly bequeathed a house in Coney Island, and in the process of settling into her new home and meeting her colourful neighbours she discovers an unknown somebody has put a bounty on her head. This gives her the opportunity to beat up the odd assassin in between getting a job as a therapist, joining a roller derby team and teaming up with Ivy to rescue a shelter full of doomed pets, before partnering with cranky retired government agent Sy Borgman (no relation to Cyborg from the Justice League, apparently) to take down his equally geriatric former enemies. Shout-out here to the artist: Hardin’s faces are incredibly flexible and full of character, and he really shines with Syborg’s jowly features.

For me, this trade was a great starting point. It assumes some basic prior knowledge, but the only things I Googled were Syborg and where the Joker was supposed to be – and even then only out of idle curiosity.  It’s fun and fast-paced like a carnival ride with an expertly-drawn supporting cast, and blackly funny in a Boondock Saints kind of way.

There are so many great comedy moments and I don’t want to spoil them, but I will say I took great pride in being able to recognise this Easter egg.

And in between butt-kicking, it is super adorable.

Overall, Harley’s characterisation seems to be remarkably consistent, so it’s not quite so important to pick the right first impression as it is with Wonder Woman. If you liked her in the Suicide Squad movie, chances are you’ll like her in this too. The plot doesn’t seem to be heading anywhere especially dramatic, but personally I love all things light and fluffy – and since the character is just out of the aforementioned fairly tense situation it makes sense to give her a breather. If you’d rather start at the very beginning, you could go with Harley’s original appearance in Batman: The Animated Series, the award-winning graphic novel of her origin story The Batman Adventures: Mad Love or maybe her first appearance in mainstream comics in the 1999 Batman: Harley Quinn.

In other news, I got paid this week, which means I can get myself up to date with current Wonder Woman! So Diana returns next post with The Truth and Godwatch. I’m psyched – not only to see how Rucka’s run plays out, but also because the next writer/artist team is Shea Fontana of DC Superhero Girls and Mirka Andolfo, whose work I enjoyed in Bombshells. It features tiny Diana and I can already tell I’m going to love it.

Making a joyful noise in the heart of London's east end

For all LGBT+ people (& allies!) who live, work or study in the London Borough of Tower Hamlets

Scene Magazine - From the heart of LGBTQ+ Life

News, opinions, comments, and features that cover all our LGBTQ+ communities

diary of a bisexual 20 year old

Bi+ women and non-binary people on life and culture

The best longform stories on the web